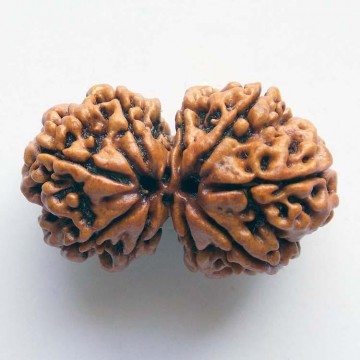 Naturally internally united Ganesh Gauri Rudraksha is considered an immense powerful Shiv-Parvati form of Shiv-Shakti. By wearing it Shiv and Shakti i.e. Mata Parvati i.e. Mata Parvati’s blessings and mercy are achieved equally. By wearing it love increased between husband and wife and their married life becomes pleasureful. Health is favorable and longevity increases and success is achieved in competitive examinations.

·        By wearing it love between husband and wife is increased in their married life and special pleasure is achieved.

·        This rudraksha is considered very helpful in money-arrival and progress in the business.

·        By wearing Ganesh Gauri Rudraksha men get the pleasure of women and mutual cooperation and respect & love are increased.

·        To identify Rudraksha, boil the rudraksha in water for some hours, if rudraksha does not give away its color or there is no effect on it, then it is real.

·        By cutting Rudraksha, if there are the same numbers of circles inside also as there are on its outside, then it is a real rudraksha. This test is considered correct but it has a negative aspect as well that then Rudraksha is destroyed.

·        For identifying Rudraksha, scrape it with any sharp instrument, if some filament comes out then consider it as real rudraksha.

·        Another solution is that keep the Rudraksha in water if it sinks then it will be real, if it does not sink then it is fake, but this test is not considered useful because the capability of rudraksha to sink or not to sink depends on its density and it's being raw or being riped and rudraksha made up of any metal or heavy material will also sink in water.

·        By keeping the bead of rudraksha in between two coins of copper, it shakes, because rudraksha has a magnetic force that is why it shakes.

·        It is said that keep the rudraksha in the nails of both the thumbs and if it revolves then it is real otherwise fake, but this method is also not correct.