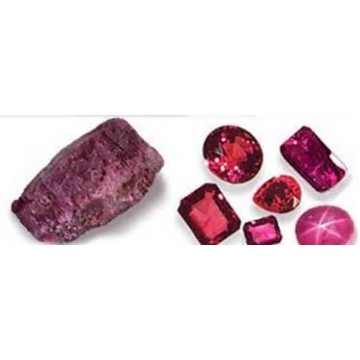 Ruby stone:- A Ruby is a pink to the blood-red colored gemstone, a variety of the mineral corundum (aluminum oxide). Other varieties of gem-quality corundum are called sapphires. ruby is considered one of the four precious stones, together with sapphire, emerald, and diamond, The word ruby comes from rubber, Latin for the end. The color of a ruby is due to the element chromium.

The Ruby stone is well known as a deep red gemstone and crystal. It is an excellent stone for recharging your energy levels, and it may stimulate your mind to be more positive and self-assured.

Wearing this stone confers one with wealth and prosperity. It derives name, reputation, growth, and success for those involved in active politics. One also gets bestowed with the pleasure of having a son. It also fulfills one’s desire of attaining a higher office. Those who find themselves to be in any sort of materialistic dearth including a shortage of wealth should have this stone.

Knowing if a gemstone is real or fake is important so that you don’t end up paying more than its value. Why should you be paying a great deal of money for a fake gem? At the first glance, you may not be able to distinguish between a real and a fake gem. So you will need to look more closely and look for signs.